In 2000 world leaders agree on eight goals to eradicate extreme poverty. Important progress has been made so far, but there is still a lot to be done and that goals expire in 2015.

Now it is time to raise your voice and vote for the changes you think could make the most difference to our world, and I warn you this is not going to be easy. You will need to put yourself in the place of those that have nothing and choose just six among a series of basic needs such as:

Definitively not easy, is it? But, almost as difficult as choosing the right goals, is to find adequate measures that will mark progress toward them, and it is there where Open Data can also play a key role on improving the human condition. 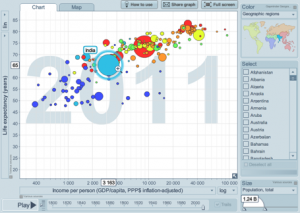 Data is critical to decide which approaches are working and which ones do not. Once you have a robust commitment to data-gathering and sharing in place, you will be able to drive change. You will see which countries are being successful in reaching their goals and why, using that observations to help other countries to do the same and, at the same time, forcing those who are falling behind to focus more resources and attention on the problem than they would have done without open data.

This post was first published at the OKFN blog in collaboration with Aman Grewal from the World Wide Web Foundation.

Last year we witnessed an impressive expansion of Open Government Data initiatives all around the world. We can assert without any doubt that it was clearly the year when Open Government spread throughout the world.

However, if we look at the map of the Open Government Data initiatives worldwide, we immediately detect than almost all of these initiatives incubated around Western Europe and North America. There is a big gap in the map, especially with reference to the developing countries.

Given the very apparent benefits of Open Government Data programmes, it is important to consider the development of similar programmes all over the world, and particularly in low and middle-income countries. But first, we need to go one step back and ask ourselves how we analyse whether a given country is ready to engage and sustain an OGD programme, and how much we know from existing initiatives.

The World Wide Web Foundation and CTIC Foundation took the first steps in this direction by conducting an assessment of the feasibility and potential of an OGD program in two countries – Chile and Ghana.

The key questions were:

But while we were trying to give answers to these questions, new important questions arose:

We decided to start by developing a new methodology for OGD readiness assessment, based on our experience and a previous study commissioned by the Transparency and Accountability Initiative and written by Becky Hogge from early 2010. For the assessment completion, we developed a questionnaire and conducted desk research and country visits to interview people and organisations that may be key to any future success.

The findings from the studies have enabled us to start a global debate that we aim to carry forward.

Chile has always been a prosperous country and has long played a leadership role in Latin America. Now, more than ever, it has a government capable of decisively delivering on its vision and related governance schemes.

In the case of Chile, the political momentum is clearly present, and there are perceived interests and needs. Governmental willingness to adopt an OGD initiative is very clear at the executive layer and extends to the middle layer. In addition, the first strategic steps towards OGD are being taken, and pioneering pilot initiatives on information openness in Public Administration have been implemented. There are also several reuse initiatives being carried out by groups of civil hackers.

Nevertheless, Chile needs to establish an institutional roadmap related to OGD, putting in place all the regulations that are needed for implementation and developing a common methodology for Open Data, selecting and adopting open standard formats for data to facilitate reuse.

A good start is the recent incorporation of OGD as one of the key objectives of Chile’s digital agenda, but they still need to improve the means, processes and channels used to disseminate information and centralize access to a single common point or nodal agency. Finally, a dialogue on information sharing between the administration, civil society and the private sector should also be initiated with the objective of increasing awareness of reuse initiatives promoted by enthusiastic civil society groups.

We came to the conclusion that Open Government Data initiatives in Chile should rely on the transparency community, a very active group that would strongly support any initiative taken in favour of information openness.

In terms of democracy, Ghana is one of the top few countries in Africa. For the common citizen, there is no apparent lack of respect for the democratic set-up, though there seems to be a trust deficit with respect to the politicians, either in power or in the opposition.

The required regulatory framework for an Open Data strategy is not currently present in the law, but is a work in progress. The RTI Act has been discussed since 2000 and its approval is imminent. However it has taken many years of study and the current draft has provisions for a number of exceptions. This has created friction in its smooth passage resulting in a number of revisions and subsequent delay. The RTI Act cannot exist in isolation and requires a supporting legal framework of data privacy and intellectual property. This work is still in its early stages and further advances can be expected in the short or medium term only if the RTI Act sees the light of day.

Civil society organizations in Ghana are very active in highlighting these issues and have become more vocal ever since oil reserves were found on a substantially large scale. They believe that this is the right opportunity for OGD initiatives that will not only improve the perception of a clean government in the minds of ordinary citizens, but would also strengthen the overall notion of a strong and transparent democracy. It would give them the right set of legal and technical knowledge to avoid the “oil curse”, which they are keen to avoid at any cost.

The opportunity here is two-fold. The RTI Act may give the much-needed legal framework for civil servants that would enable them to answer the data requests in a defined process. Simultaneously technology and implementation support with respect to the open interoperability framework would provide a much needed standardization platform to the apex IT agency of the country, a critical area where they are already soliciting support from external agencies. Civil society organizations like the Population Council are already running initiatives in few African countries related to data (demographic in this case) reuse by third parties that can act as examples and guideposts for OGD initiatives.

The case of Ghana has its own set of challenges and the situation may not be ideal. In such a scenario the groundwork to bootstrap OGD initiatives would be tougher, but at the same time the potential global impact would also be significant.

We are publishing the draft versions of both the reports. Our objective is to gather comments from the OGD community. We invite you to read the reports for Chile and Ghana and send in your comments atogd-comments@webfoundation.org before the end of March 2011.

Your comments will assist the growing OGD community in the developing world by providing new tools, best practices and support.