Governments are increasingly creating new open data initiatives and they are the most popular Open Government Partnership commitment so far. Still, the potential of Open Data and its implications for governance are only starting to be articulated.

The mission of the OGP Open Data Working Group is to hold the promise of radically transforming the way government and societies work together to analyze and solve challenges; helping OGP governments implement their commitments and develop more ambitious and innovative action plans related to open data. 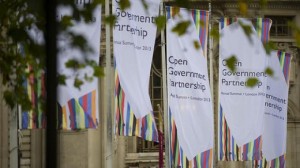 Participation in the group is open to all OGP countries and civil society organizations working on open data issues. I was invited to participate on behalf of OpenKratio, a citizens’ group that promote Open Government and Open Data values within the society and the only Spanish representation in the group so far.

The working group first convened on the side of the OGP Summit in London last October. Topics that were discussed during the meeting included:

There was also a formal launch in a public event as part of the really interesting OGP summit general agenda, which included several high-level participants from governments and civil society, such as Tim Berners-Lee (Founding Director of the Web Foundation; President and Co-Founder of the Open Data Institute) and Beth Noveck (Professor of The Gov Lab, New York University).

This panel explored the current reality of open data implementation, drawing upon early findings from the Open Data Barometer study, and how to move faster to close the gap between rhetoric and reality to unlock the real potential of open data.

The group is currently working on a more specific concept note that will drive the group work in the future on the basis of the feedback and input from the first meeting. Stay tuned for the next steps of the Group during the following months.